The Water Museum manages and promotes a group of buildings and monuments built in the eighteenth and nineteenth centuries that mark an important period in the history of Lisbon’s water supply, thus enabling visitors to discover the historical, technological and scientific heritage of the role played by water in the city. On the one hand, the museum’s permanent exhibition offers an interdisciplinary look at the theme of water, considering questions related to history, science, technology and sustainability and inviting visitors to explore such subjects as the presence of water on planet Earth, the history of Lisbon’s water supply, the hydrological cycle, the urban water cycle, water pollution and the water footprint. On the other hand, it also enables us to understand the functional relationship between the various buildings and areas that together make up the Water Museum, such as the Águas Livres Aqueduct and the subterranean galleries, the Mãe d’Água das Amoreiras Reservoir, the Patriarchal Reservoir and the Barbadinhos Steam Pumping Station.

Águas Livres Aqueduct
Built between 1731 and 1799, the Águas Livres Aqueduct formed a vast system for the catchment and transport of water by gravity flow through pipes and channels, over a total length of 58 kilometres, running from the springs located 14 kilometres to the north-west of Lisbon to the capital’s water fountains.
In the course of its journey, the aqueduct crosses the Alcântara valley, over a distance of 941 metres, with a series of arches that reach 65 metres at their highest point. This stretch of the aqueduct can be visited between Campolide and the Monsanto Forest Park. It has been classified as a National Monument since 1910.
Open: Tuesday to Saturday: 10.00 – 17.30 (closed on public holidays)

Barbadinhos Steam Pumping Station
Built next to the final reservoir of the Alviela Aqueduct, this pumping station was in operation from 1880 to 1928 and was the driving force behind the expansion of Lisbon’s domestic water supply. The building still retains its old steam pumps, which are important examples of the city’s industrial heritage, and it is here that the Water Museum’s permanent exhibition is housed, inviting visitors to discover the role that water has played in the city’s history, science, technology and sustainability. Since 2010, this pumping station has been classified as a group of buildings of public interest.
Open: Monday to Saturday: 10.00 – 17.30 (closed on public holidays)

Mãe d’Água das Amoreiras Reservoir
Designed by the Hungarian architect Carlos Mardel in 1746, this reservoir was built to receive and distribute the water brought to the city by the Águas Livres Aqueduct. Inside the building is a remarkable water tank, 7.5 metres deep and with a total capacity of roughly 5500 m3. Visitors can climb to the top of the reservoir, where there is a roof terrace offering a panoramic view over the city of Lisbon. In the present-day Rua das Amoreiras is the Gauge House, which controlled the flows of water being sent to the Loreto and Esperança galleries for the supply of the city’s fountains, factories, convents and palaces.
The reservoir has been classified as a national monument since 1910.
Open: Tuesday to Saturday: 10.00 – 17.30 (closed on public holidays)

Loreto Gallery
On reaching Lisbon, the water transported by the Águas Livres Aqueduct was conducted through a network of channels consisting of five galleries, most of which run below ground and cover a total length of roughly 12 kilometres. These galleries were designed to guarantee the supply of water to the city’s fountains and some public establishments. Particularly noteworthy is the Loreto Gallery, built in 1746, which can be visited along the stretch between the Gauge House, in Rua das Amoreiras and the garden of the São Pedro de Alcântara belvedere.
Advance booking is required if you wish to visit the gallery.

Patriarcal Reservoir
This reservoir is hidden under the Jardim do Príncipe Real, more precisely beneath the lake. Its building work was completed in 1864, and it has a total capacity of roughly 880 m3.
It was one of the first reservoirs of the modern water distribution network, designed in 1856 by the French engineer Louis-Charles Mary and facilitating the supply of water to the city’s inhabitants. The Patriarchal Reservoir was originally supplied by the Águas Livres Aqueduct, and then, after 1890, by the Alviela Aqueduct. It is octagonal in shape, with 31 pillars supporting the stone arches of the vaulted ceilings.
Open: Saturdays: 10.00 – 17.30 (closed on public holidays)

Historical and Technical Documentation Department
The Water Museum also holds the CDHT – Historical and Technical Documentation Department of the company, responsible for the historical archive (including historical engineering and hydraulics drawings, a photo collection and a library for support of historical researches) and the up-to-date technical archive (including engineering and hydraulics drawings collection and a library dedicated to the technical areas and national and international standards).

Traveling Exhibition - The Aqueducts of Portugal
The exhibition "Aqueducts de Portugal" is a photographic survey of some of the aqueducts still existing in the country built mainly between the 16th and 19th centuries. The exhibition linked to the history of water supply, allows to observe and understand in a historical and architectural perspective, the value of this heritage.

Other activities / Performances
In a challenge to the process of knowledge, reflective thinking, critical analyses and aesthetic learning, aiming on stimulating and involving the relationship and participation of communities with the museum, we develop activities related to theater, dance and music supporting new artists and creating links to the universities.

Based on the SDG 6 – Drinking water and sanitation -, this route aims to raise awareness of the water heritage in Lisbon through visits to infrastructures of the 18th and 19th century. This project includes the creation of a guided visit and an exhibition composed of 4 modules with 8 exhibition panels, where visitors can learn about the 5 “P’s” that are the basis of Agenda 2030: People , Prosperity, Planet, Peace and Partnerships.
All panels have an interactive component. There is a panel with a global call to action and a panel where visitors are invited to vote on their favorite Sustainable Development Goal.
The exhibition intends to demonstrate that there is commitment in the implementation of the SDGs, recognizing Sustainable Development as one of the great challenges worldwide.

The visit includes a journey of about 1 km, which includes a visit to two reservoirs belonging to the Water Museum, the reservoirs of the Mãe d’Água das Amoreiras Amoreiras (18th century) and the Patriarcal (19th century), through the gallery Loreto Underground. This gallery dating from 1746 made supply to the fountains, convents, factories and noble buildings. Integrated in the Routes of Education for Global Citizenship in partnership with NGO Instituto Marquês de Valle Flôr highlights the importance of water in the development of the city and the quality of life of the population (urbanism and health). This Route aims to contribute to the active involvement of citizens as co-creators of a fairer, more dignified and sustainable society by stimulating new channels of communication for Global Citizenship Education (ECG) and more specifically strengthening the skills for the lives of young people adults in an innovative and creative approach, through the construction and dissemination of educational tourist routes.

Being accepted that the Museum is not only a repository of objects but a space of education, of transmission of interdisciplinary knowledge, we consider that the museum is also a privileged space for the education of values, namely, with respect to environmental values ​​and citizenship.

The initiatives proposed by the education service are aimed at sensitizing the population to the efficient use of water and respect for natural resources, intertwining SDGs themes such as: No. 3 – Health, nº 6 – Potable Water and Sanitation, No. 9 – Industry and innovation, nº 12 – Sustainable production and consumption and nº 13 – climatic action, from the Museum’s own permanent exhibition which is divided into four areas: Water on Planet Earth, Water in the history of the city, Water Cycle and Water Footprint.

In our Minilab the Museum also stimulates a group of activities for families and school groups, especially workshops lasting approximately 1 hour. The activities aimed at schools are adapted to the various education cycles, from the age of 3 to 15 years: Pre-school “Eyes on Water”, 6-10 years “We are Water” and 10-12 years “Water Scientists”.

The Educational Service of the Water Museum has based its practice in pedagogical dynamics of mediation and interpretation between the
public and the Water heritage (constructed or as a natural element).
This service, through the realization of programs, projects and partnerships, with a occupational, pedagogical, playful, technical or expressive scope, offers a program that covers all the public: children, youth, families and adults who visit the museum in an individual context or in organized group: schools, cultural, senior or others. The Museum educational service offers - pedagogical visits, commented visits, guided visits, thematic visits and workshops.
The program also includes the reception and development of innovative projects and partnerships, aiming on training and pedagogical skills, academic research and integration goals, in the area of Water heritage and environmental awareness, in a shared intersection with other approaches and knowledges.
In order to fulfill these presuppositions, the program is structured according to the Permanent Exhibition and the various monuments that compose the museum through a multidisciplinary team composed of technicians from the areas of history, environment and cultural communication.
Regular Guided tours:
The water Museum offers the public a vast program of thematic guided tours, with prior booking required, that allows the visitor to receive all the knowledge , in addition to the permanent exhibition, associated with the history of water supply and it’s heritage represented by a set of monuments and buildings built between the eighteenth and nineteenth centuries. The monuments /sites are:
 Aqueduto das Águas Livres
 Reservatório da Mãe d’Água das Amoreiras
 Reservatório da Patriarcal
 Estação Elevatória a Vapor dos Barbadinhos
 Galeria subterrânea do Loreto

Thematic guided tours:
Gardens, Parks and Water – This visit aims are on the history associated with the squares, gardens and water in the 19th century in the seventh hill of Lisbon. The course starts in Lisbon Botanical Garden goes through the underground tunnel of Loreto (part of the Water museum – Águas Livres Aqueduct) ending in São Pedro de Alcântara belvedere. The visit is a partnership between National Museum of Science and Natural History of Lisbon and the Water Museum.
Water, Health and Heritage – Water, city growth and public health always went hand-in-hand throughout history. In a joint visit to the exhibition “800 Years of healthcare in Portugal”, the Health Museum and the Water Museum led the visitors to travel through the history of health, water supply and hygiene in Lisbon.
The Museum in pieces- The cycle "Museum in pieces" has a monthly session taking place every last Wednesday at lunch time with a duration of 30 minutes. Around a chosen object and a different and unlikely location every time, the Museum offers the visitor a personalized way to complement their knowledge on water and on the history of Lisbon during the lunch hour.
http://www.epal.pt/EPAL/en/menu/water-museum/activities-andservices/cultural-visits-and-guided-tours
http://www.epal.pt/EPAL/en/menu/water-museum/activities-andservices/pedagogical-service 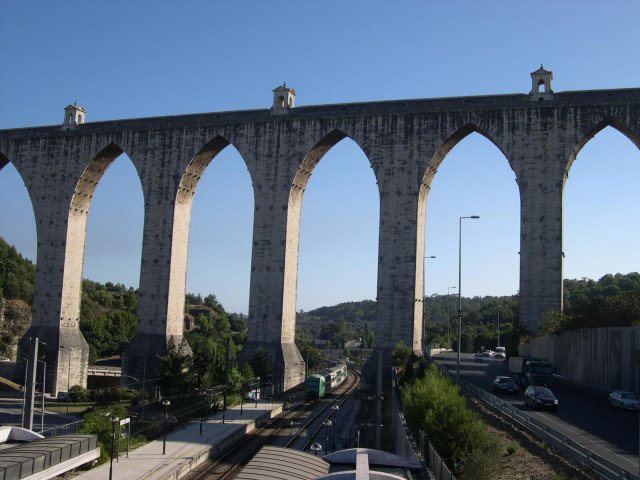 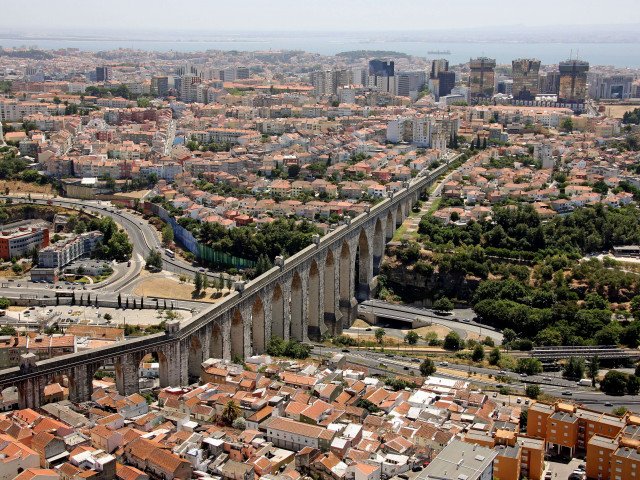 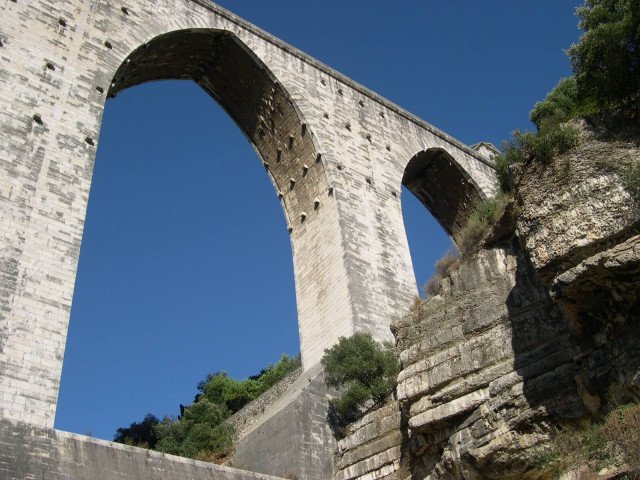 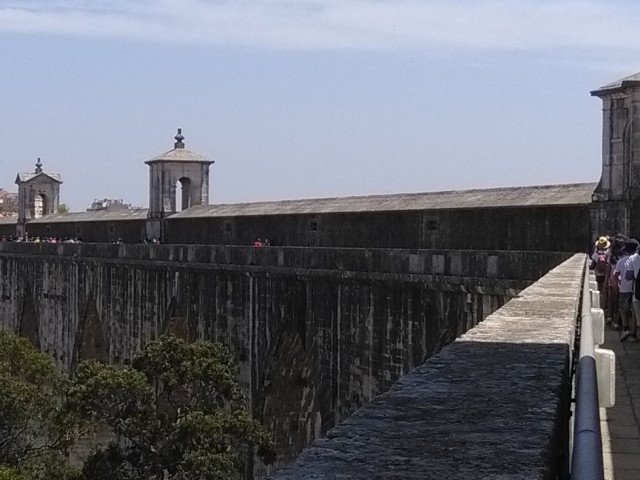 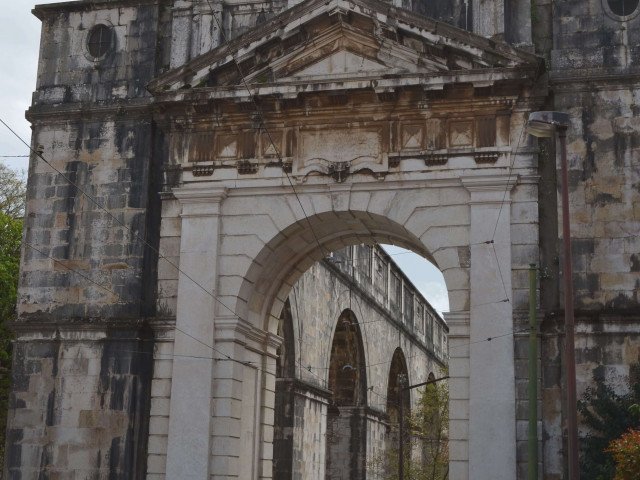 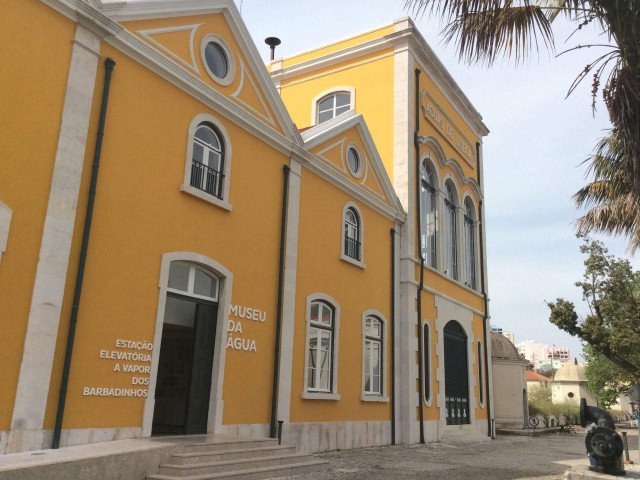 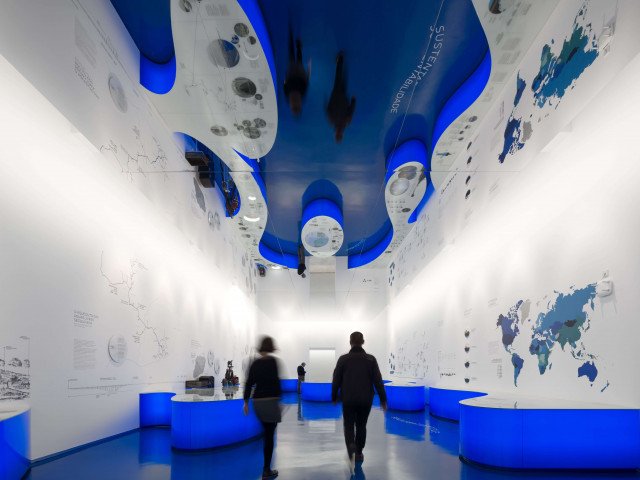 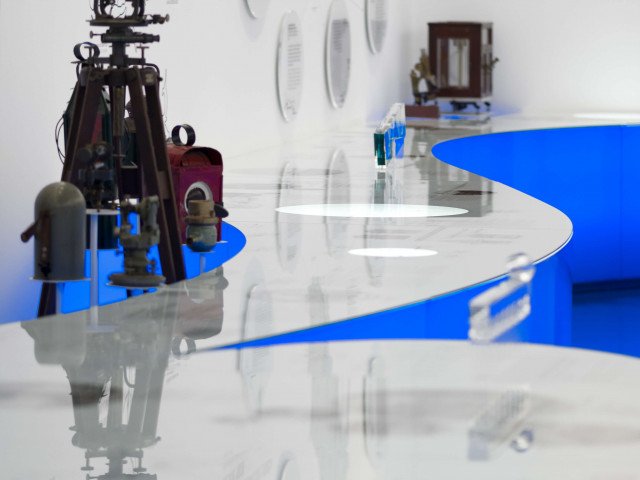 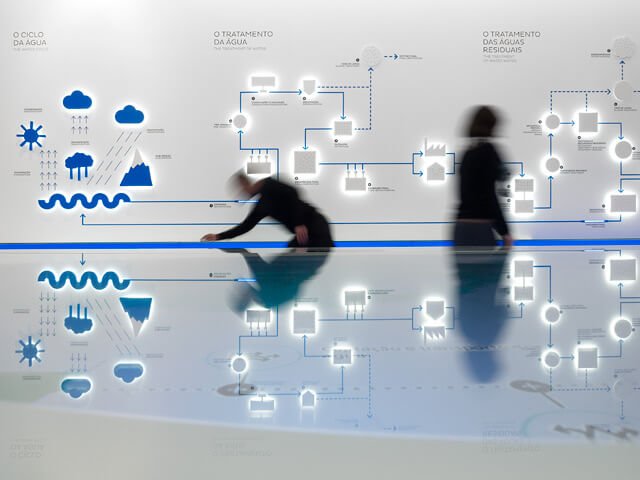 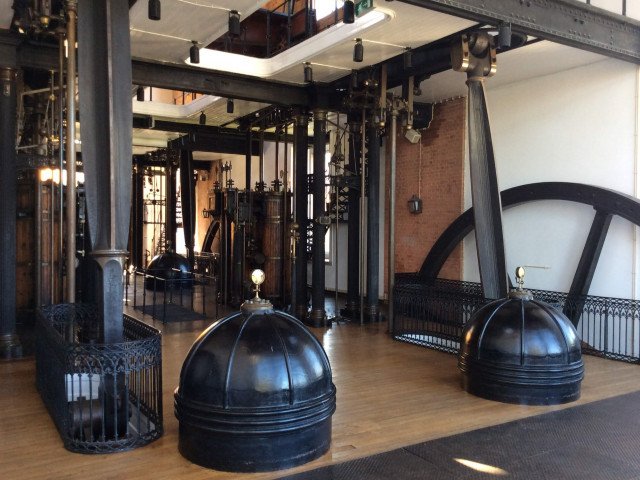 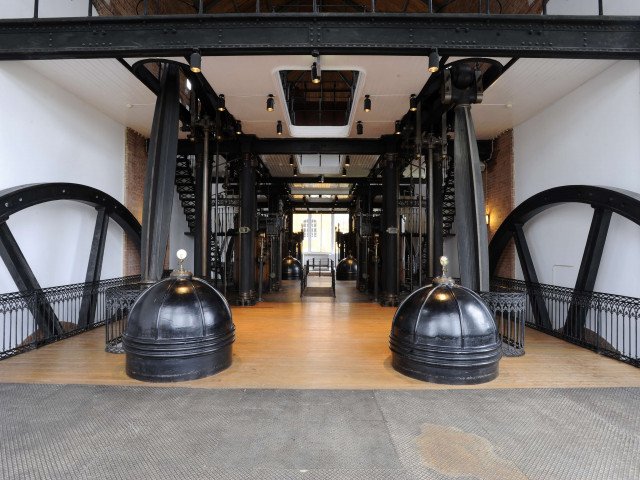 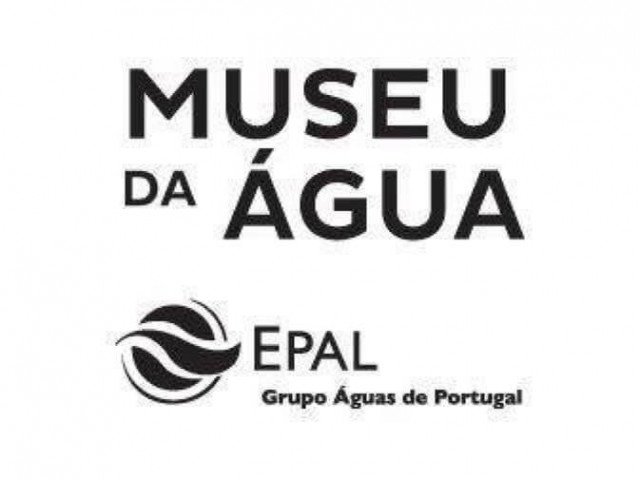 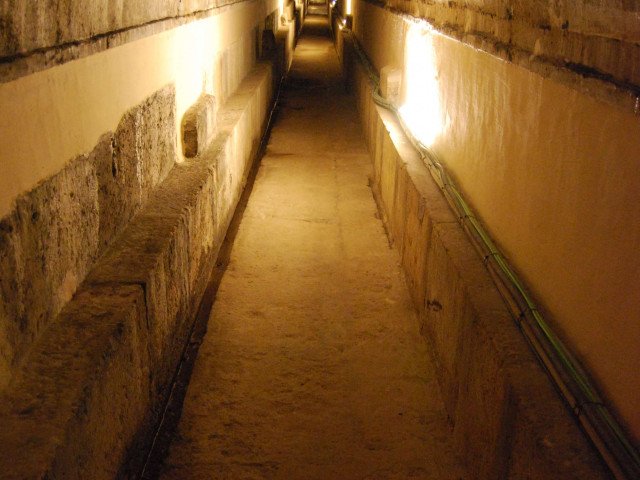 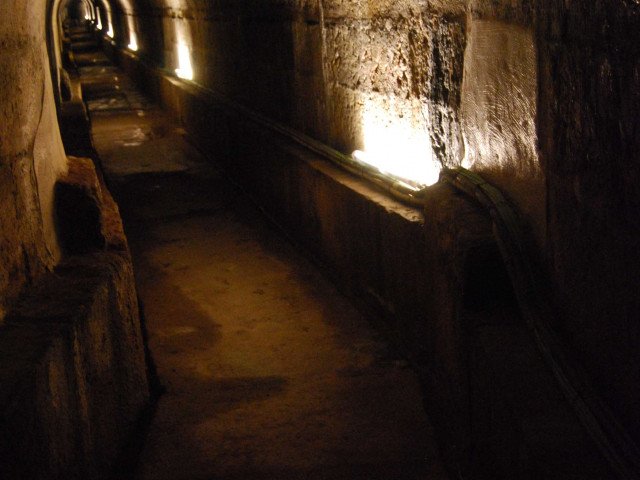 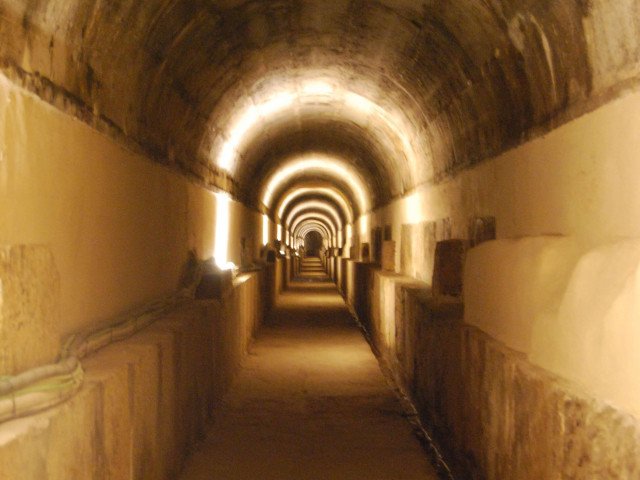 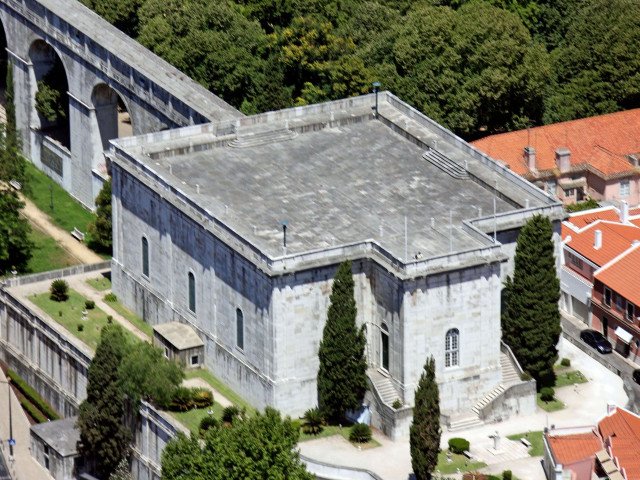 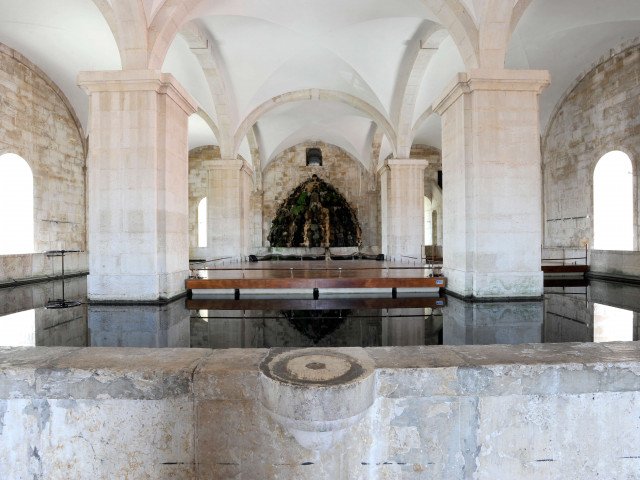 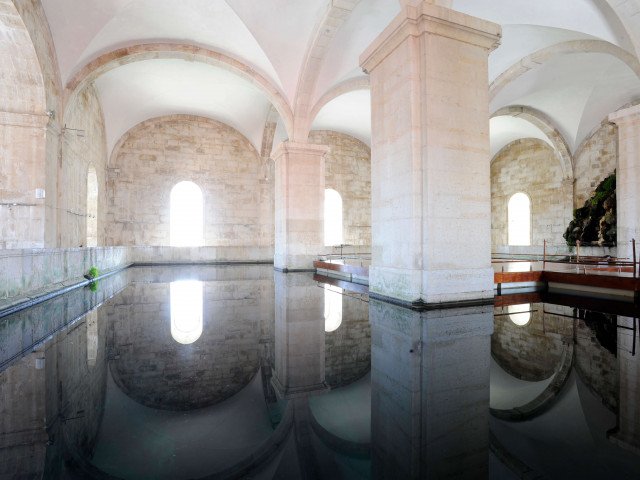 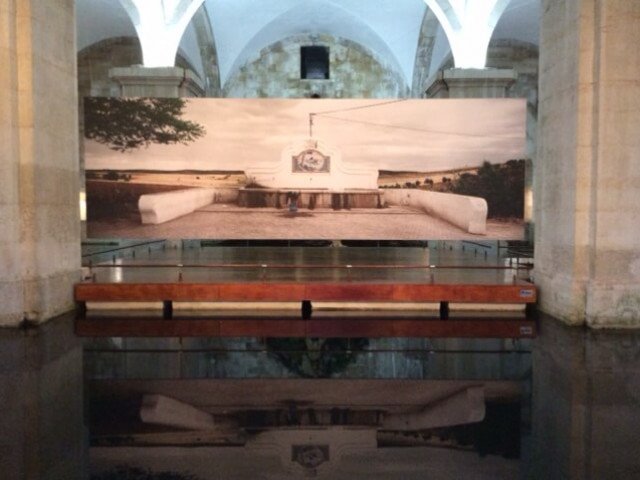 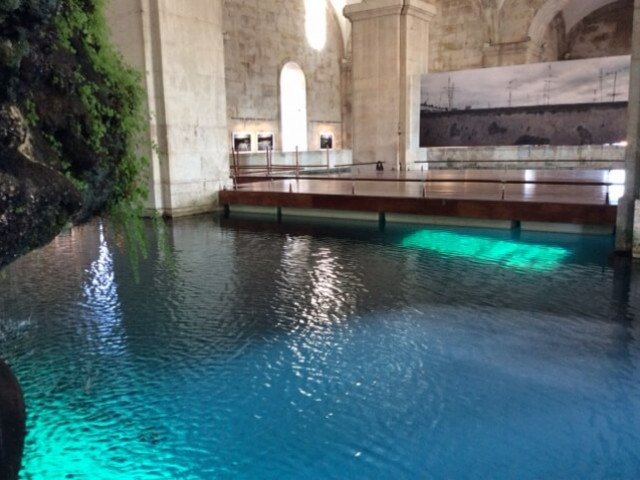 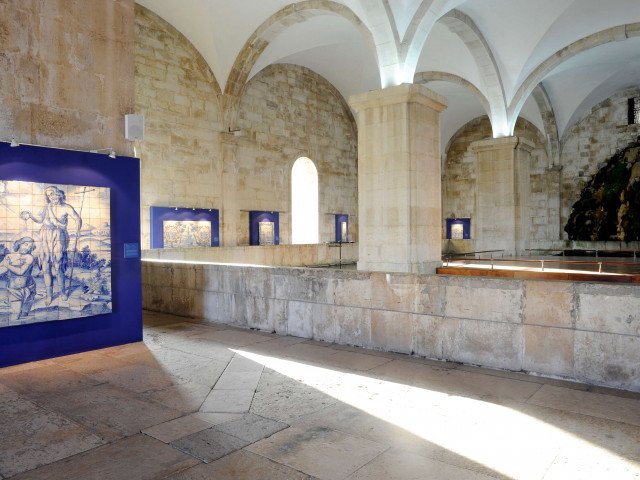 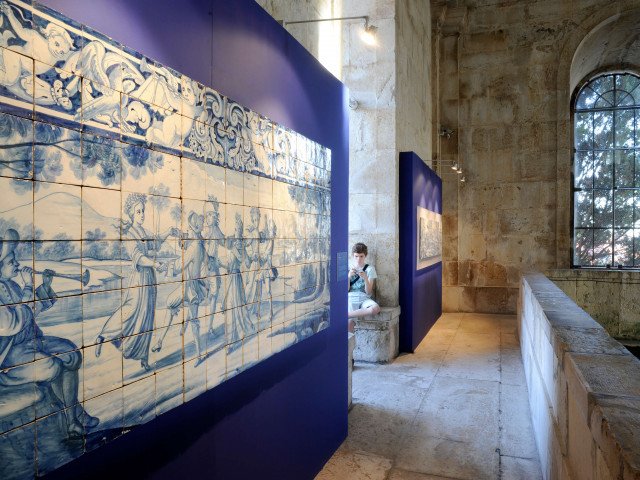 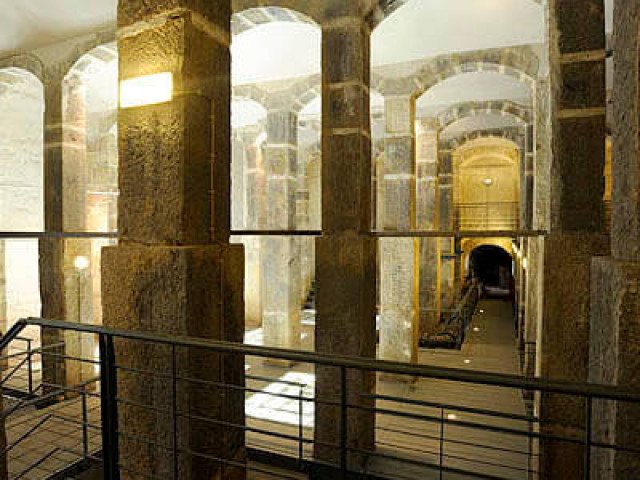 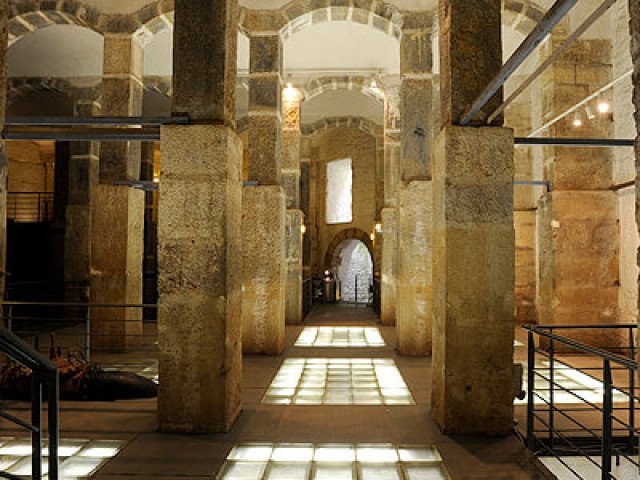 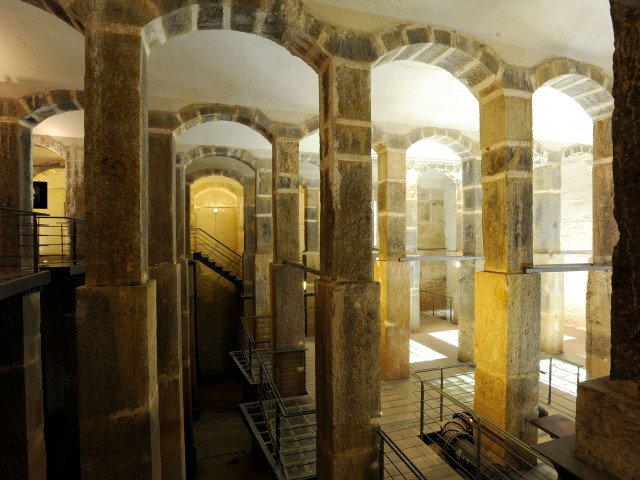