Karlovac Freshwater Aquarium AQUATIKA, a unique freshwater aquarium on the banks of the Korana River in Karlovac, Croatia

Aquatika –  a protector of biodiversity

Aquatika is intended for everyone, from children and young people, to scientists, aquarium enthusiasts, nature lovers and the local population, and aims to raise awareness of the exceptional biodiversity of our freshwater ecosystems. Its primary purpose is to educate visitors as to how the exceptional natural wealth of Croatia can be used in the function of sustainable tourism. The aquarium displays Croatian freshwater fish fauna and plants and their habitats, with more than 80 species of fish, including 30 endemic species, which are plants or animal species that are only found in one specific geographic area. If the area is very small (a cave, lake, river or mountain), this species is then classified as stenoendemic. It is important to note that among the 150 fish species found in Croatia’s rivers and lakes, 52 are endemic. This wealth of species is the consequence of Croatia’s geographical position, which includes both the Danube (Black Sea) and Adriatic Basin.

The aquarium complex is designed to display the course of a karst river and its various habitats, such as the Korana where the aquarium is situated. The design is based on the idea of dividing the river course into its upper, middle and lower sections.

Thanks to the green garden roof concept, the aquarium has a minimal impact on the landscape, and the green vistas of the surrounding areas have been preserved.

Aquatika is a unique freshwater aquarium in Europe and provides visitors with the unique experience of the underwater world that we seem to know well, but still have so much more to learn.

With this photography exhibition we want to highlight the great role that biodiversity has in sustainable development. We have shown 10 different endemic species that inhabit only Croatian rivers.

We aim to encourage and promote the activities that protect nature.

With this photographs we have shown in an interesting and educational way the richness of our rivers, with some facts about our endemic fish species.

Link on our web page: https://aquariumkarlovac.com/endemi-hrvatskih-rijeka/.

The exhibition of the speleo-photography “The Underworld water” shows art photography created under enemy subterranean conditions. We find underground water in all possible forms and aggregate states. From dropps and creeks to underground streams and rivers. Drinking water is invaluable treasure hidden in the caves of Croatia. The importance of protecting this wealth is not only due to the exceptional biosphere that exists in this environment but also for the protection of the surface world.

Link to our web page: https://aquariumkarlovac.com/izlozba-vode-podzemlja/.

EXHIBITION 3: “The rivers of Croatia” (The photography exhibition)

Author is Goran Šafarek, a well-known Croatian biologist, photographer, filmmaker and publicist. About 20 large photographs show some of the most beautiful scenery of our rivers, recorded in water, on the surface and from the air, including some of the rare species of animals. With this exhibition we want to enhance the importance of environmental protection, biodiversity and the tradition and beauty of life along the river.

Link on our web page: https://aquariumkarlovac.com/otvorenje-izlozbe-gorana-safareka/.

Boat trip on ship Zora on the River Kupa

In the Karlovac surroundings in the village of Brođani, there is the Ship Zora – a historic boat that sailed the River Kupa in the 18th century and carried grain. On this boat trip one can experience a unique view of the nature from the river boat. During the 90 minutes of sailing the shipwreck will familiarize you with the stories of the boat, the history of the Pokupje reagion, the sinked ships, Karlovac sirens and the richness of the plant and animal world.

Explore the Karlovac town on bike

Two of the major Croatian cycling routes go through Karlovac, the one from Slovenia to the Plitvice Lakes, and the other from Bosiljevo to Zagreb. Thanks to the exceptionally preserved natural surroundings of the Karlovac area, the picturesque countryside with plains, rivers, wooded hills and mountains, cycling will ensure an unforgettable experience. A highly recommended adventure route: from Karlovac, via Ogulin, to Novi Vinodolski, along the historic Rudolfina road.

A walk through the city of parks

The “town of parks” is proud of its Vrbanić Gardens. Its landscape design is its most valuable feature. The park is designed to be a small open-air botanical garden, located on the south-eastern part of the town, between the Korana river and the Karlovac old town, the Star, and is a part of the famous recreational area on the Korana’s left bank. Today, the park is a favourite gathering place for numerous locals, as well as for the town’s visitors who enjoy the shade of centuries-old trees. 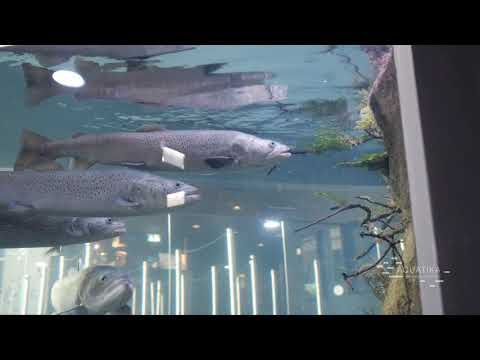 The only freshwater aquarium in Croatia

The layout of the aquarium follows the tipical karst river flow, providing detailed, interesting, instructive and exciting aspect into the mysterious freshwater world.

Ichthyofauna and Bivalvia fauna of the Kupa-Kupa Channel

The purpose of this research is to determine the number of species and families of fish and Bivalvia. Population structure and distribution were analysed from August 2017 to May 2019. In fish population were identified 24 species from nine families, and five invasive species. Dominant fish species are Rhodeus amarus and Alburnus alburnus. The channel is also inhabited by an endemic species, Cobitis elongata. Analysis of Bivalvia found four species from two families, dominant species being Anodonta anatine.

Distribution of the Unionidae family in the Kupa River

Distribution and population structure of Bivalvia from the Unionidae family in the Kupa River course in Karlovac County was analysed from April to October 2018. At nine different locations, six species from four genera of this family were found. The dominant species is Unio crassus, while the least represented one is Pseudanodonta complanata. The invasive species Sinanodonta woodiana was found in four locations. This is the first research aimed at the distribution and population structure of this family in the Kupa River.

Age and growth of the Illyrian chub from river Cetina

In Croatia, the Illyrian chub Squalius illyricus is endemic to the Adriatic Basin and inhabits rivers Cetina and Krka. In the last 20 years, research on this species has not been made. From the Cetina river 41 individuals were collected in April 2018 and their alometric growth, condition and age were measured. The results indicate almost isometric growth of individuals, indicating that the specified locations are favorable for their survival.

“Written On Water“ Project aims at bridging formal and non-formal education to get students close to work realities, by offering an innovative practical training focusing on the issue of rivers and water pollution.

WoW’s objective is to encourage the development of environmental awareness and green skills of young people. Water analysis experience will be the main goal. Collaboration with Aquatika was in the topic which refers to the determination of age structure of fish.

GLOBE students have been monitoring the climate, biological and chemical factors in the environment on which projects are being created. The sponsor of the GLOBE is NASA. Students are enabled to communicate with scientists and students from all over the world.

In the category of Hydrology, students of Elementary School Banija from Karlovac won the 1st place in the national competition with the project “What are the living conditions of fish in Aquatika compared to their natural environment?”.

Aquatika organizes several different workshops for school children during their visit to the aquarium. These workshops are adjusted to the children’s age and have several important goals:

AQUATIKA as the Educational point for Freshwater Ecosystems

Clean, accessible water for all is an essential part of the world we want to live in and there is enough fresh water on the planet to achieve this. However, due to bad economics or poor infrastructure, millions of people including children die every year from diseases associated with inadequate water supply, sanitation and hygiene.

Croatia is rich with clean and accessible water, and our activities are focused on protection of the water-related ecosystems, including wetlands, rivers, and lakes, and wildlife in the freshwater ecosystems in their natural habitats.

The action involves 106 aquariums from 33 countries, including 67 from 21 EU countries. The Global Coalition of International Aquariums is coordinated by the European Commission, together with the United Nations Environment Program.

PROJECT 2: “NO to plastic water bottles”

Aquatika has completely disposed of the water in bottles. We offer our visitors only Karlovac water from the waterwork, with the story that water in the Karlovac area is of excellent quality.

With this move, we want to encourage other public institutions, companies, catering establishments and households to reduce the use of disposable plastic, especially buying and serving water in plastic bottles. We will give to Karlovac’s caffe bars the water kettle and ask them to be involved.

PROJECT 3: Workshop “Say NO to plastics”

Plastic pollution poisons our planet – the sea, the river, the ground, the animals and us humans. Earth day is devoted to raise public awareness of the need to change human behavior and to prevent plastic pollution.

Regarding this day, Aquatika organized ecological workshops: competition in recycling and making bird feeders, in order to educate and to encourage people to reduce the use of plastic in everyday life and to recycle used plastics.